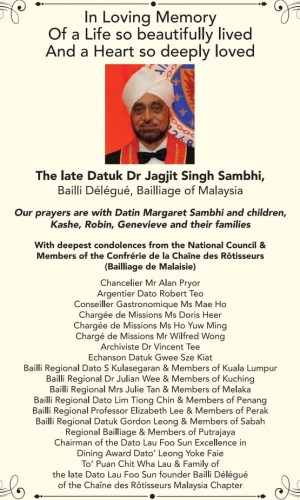 This evening we are here to also remember a true gentleman, a friend, a sincere colleague and a fellow brother of the Chaine des Rotisseurs - Dato Mac Saw Eng Lock or as we know him as MAC SAW.

Those of you who have known him will appreciate his undivided loyalty to the Chaine. He joined the Chaine in 1981 and was elected as Bailli Regional of Penang from 1988 to 2000 – for 22 years. Under his leadership, the Penang Bailliage flourished in members and programmes – many held in his house which he called “Rumah Arang”. He also served as the Bailli Delegue for a few months before I took over in 2005.

Mac Saw spent most of his youth in Scotland and England. He married Ann and they have 2 boys and 2 girls. They were a very close-knit family. Ann and Mac Saw loved travelling around the world and enjoying good food and wines. They travelled to most wine growing areas of the world, sampling the wines and the food. Ann was a Chaine member and so are his son, Andrew and daughter, Charmaine.

Tragically Ann passed away some years ago and Mac Saw never recovered from his loss. He gave up most of his favourite hobbies and his positions – almost becoming a recluse.

Mac Saw was the pillar of hospitality. I remember when Margaret and I went for the Intronisation Ceremony in Penang in 2006, he insisted on coming to pick us up from the airport. When I objected many times, he just said “I am coming, you have no choice”. He did pick us up and as the Intronising Officer’s plane from Singapore was 1 hour delayed, he said he would show us the new development around the airport. When it was time to return to the airport, he announced “I do not know the way back and I am lost”. Luckily a petrol station gave us directions and we went back to the airport to pick up the Intronising Officer.

On another occasion a few years ago we also went to Penang to conduct an Intronising ceremony. The next morning he took us to his palm oil plantation on the mainland to show how it works. A lunch was also arranged on our return. However, as expected we were late to coming back and we told Mac Saw to take us direct to the airport but he insisted we have lunch first and added “I will take you to the airport on time”, which reminded me of the play “My Fair Lady” where the line goes “Take me to the Church on Time” said a drunken actor to his mates as he was getting married the next day in church. We did have a lovely lunch with wines which were grown in his daughter’s, Charmaine  vineyards in Perth. With the wonderful driving of Mac Saw we did catch our plane – but just!

Whenever Mac Saw came to Kuala Lumpur for the Gala Dinner always with his family, he carried a “magical bag” filled with Chaine handkerchiefs, scarves, ties, badges, etc and distributed them to members. One year he comforted me and said “Where is your pocket handkerchief I gave you last year”. I pleaded that I had forgotten and he extracted another one from his magic bag, folded it and inserted it into my dinner jacket pocket and said “You look a proper Bailli now”.

In our sorrow let us remember him as he meant to each of us and not forget his cheerfulness, his wits, his kindness and hospitality.

Mac Saw, you are no longer with us but your spirit will stay with us to propel us into the ways of humanity.

REST IN PEACE, MY BROTHER.

To conclude we all send our heartfelt condolences to his children and family. On a slightly cheerful note let us for a moment sit in silence and think about Mac Saw, the charming, friendly and the hospitable person that he was while listening to the music, specially selected by Margaret, my wife for him. Extract of the Overtures “Marriage of Figaro” by Wolfgang Amadeus Mozart